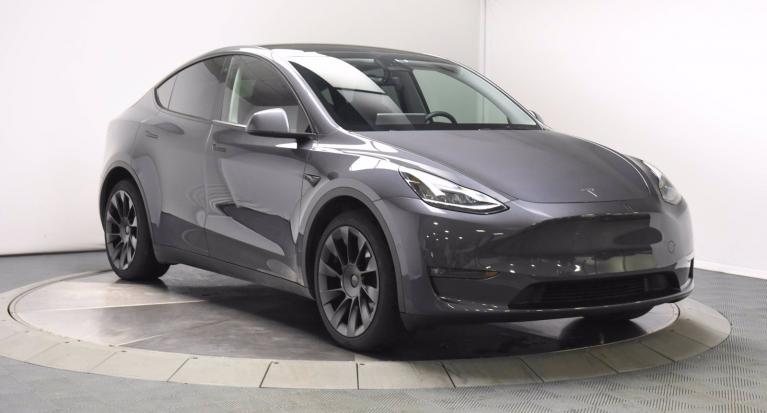 Using the chassis, interior, and powertrain from the smaller Model 3, the 2021 Tesla Model Y adds additional cargo space, an optional third row of seats, and SUV styling to the more affordable end of the brand's offerings. Power from the Model Y's dual on-board electric motors is plentiful; the base Standard Range model comes with rear-wheel drive but the Long Range and Performance models get all-wheel drive as standard. Driving range is superb with a maximum range of up to 326 miles per charge; more expensive rivals such as the Audi e-tron and the Jaguar I-Pace offer far less. While the interior lacks the panache of non-EV rivals such as the Mercedes-Benz GLC-class or the Volvo XC60, it's still fairly comfortable and practical, if a little rough around the edges.

Other than the introduction of an optional pair of pop-up third-row jump seats, we aren't forecasting any major design or technology upgrades for the Model Y this year.

Buying an electric car is all about the range, and the Long Range and Performance models offer 326 and 303 miles of driving range, respectively. We'd go with the Long Range, which maximizes driving range while offering plenty of performance. There are few ways to customize your Model Y, and only five colors for the exterior—three of which cost an additional $1000 or $2000. And those seeking the optional third row of seats will be able to add them for an additional $3000.

EV Motor, Power, and Performance
Unlike the Model 3, the Model Y lineup no longer includes a Standard Range cost-leader trim. The Model Y's Long Range and Performance models are more compelling than a Standard Range trim anyway. Thanks to a generous Car and Driver reader, we were able to test an all-wheel-drive Long Range, which zipped from zero-to-60 mph in just 4.4 seconds, a mere 0.4 second behind our long-term Model 3 sedan. The Performance model delivered an even quicker 3.6-second blast to 60 mph in our testing. While the Model Y offers impressive acceleration, it doesn't deliver the same level of driving satisfaction as the Model 3. The SUV body creates a higher center of gravity, which dulls the sharp edge of the Model 3's handling, and the Y's ride is considerably rougher over road imperfections as well.
Range, Charging, and Battery Life
The all-wheel-drive Long Range offers 326 miles of range; the Performance model's estimated range drops to 303 miles. But the latter comes with 20-inch wheels, a lowered suspension, a higher top speed (145 mph), quicker claimed acceleration, and a dedicated Track mode. The cheapest Model Y is the Standard Range model but it comes with a lower driving range of 244 miles per charge.
Fuel Economy and Real-World MPGe
The EPA estimates that the Long Range model is good for 131 MPGe in the city and 117 MPGe on the highway, while the Performance model's fuel economy estimates are 115 MPGe city and 106 MPGe highway. The Long Range model that we tested over our 200-mile highway fuel economy test route recorded just 94 MPGe and an estimated highway driving range of 220 miles, while the Performance model delivered a result of 98 MPGe and 230 miles of driving range.
Interior, Comfort, and Cargo
The Model Y doesn't come with the larger Model X crossover's complicated Falcon Wing doors; its interior is mostly carryover from the Model 3 sedan. Like that car, it is largely free of buttons and relies mostly on a large infotainment display centered on a simple dashboard. An all-glass roof lends an airy ambience to the cabin but is heavily tinted to avoid roasting occupants in Sun Belt states. The optional third row of seats adds a steep $3000 to the Model Y's price—we can't imagine they'll be spacious enough for adults to ride in comfort.
Infotainment and Connectivity
In the Model Y, almost every function is managed through the large, slim infotainment display that's in the middle of the dashboard. Everything from climate control to the speedometer is shown on this display, which takes some getting used to. The Model Y offers the same entertainment functions as the Model 3, including embedded Netflix, Hulu, and YouTube apps as well as video games perfect for killing time while waiting for the battery to charge at the public charging station. Don't worry, drivers are locked out of using these distractions while the vehicle is moving.
Safety and Driver-Assistance Features

Tesla is known for its very advanced Autopilot semi-autonomous driving system, and the Model Y offers the feature as standard. Even more advanced features such as a self-parking feature and a Summon feature are optional. To see crash test ratings visit the National Highway Traffic Safety Administration (NHTSA) and Insurance Institute for Highway Safety (IIHS) websites. Key safety features include: 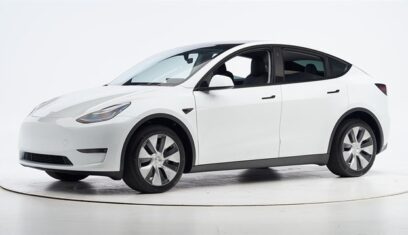