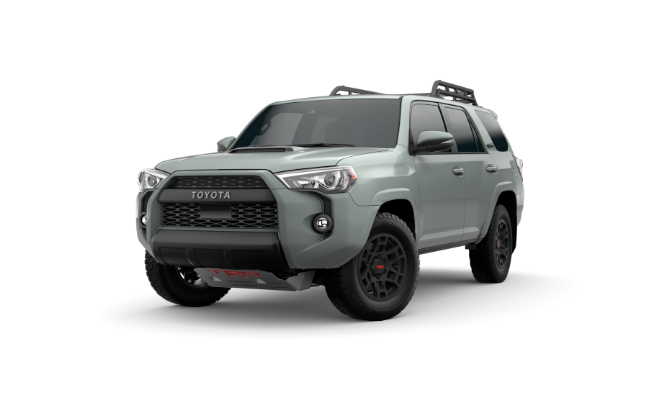 The 2021 Toyota 4Runner is one of the most rugged mid-size SUVs on the market, but also one of the oldest and least refined. While its sturdy body-on-frame construction and off-road-oriented options make it seriously capable when the road ends and bolster its outdoorsy image, its plasticky interior and inefficient V-6 engine are notable flaws. Toyota has modernized this ancient four-wheeler with an impressive amount of standard driver assists and infotainment features. The 4Runner also has generous cargo space, and its roomy cabin can be outfitted with a small third row. Clumsy on-road driving behavior and a lofty price tag make the 2021 4Runner less desirable than most other popular competitors, but it remains a worthy alternative to the Jeep Wrangler—another vehicle in which off-road chops take precedence over everyday refinement.

The latest 4Runner adds a new limited-production Trail Edition for 2021. Toyota says it will only build 4000 copies, which are based on the base SR5 model and come with rear- or four-wheel drive. The Trail Edition is equipped with 17-inch dark gray TRD wheels and black exterior badges. Inside, it has black seats with tan stitching and all-weather floor mats. The 2021 4Runner also receives newly standard LED headlights, and the TRD Pro model gets a couple of unique upgrades: a new Lunar Rock exterior color, newly designed black TRD wheels wrapped in Nitto Terra Grappler tires, and retuned dampers that Toyota says are intended to improve isolation during trail driving.

We think the TRD Off-Road model is the 4Runner to get. It's not as capable off-road as the lifted TRD Pro, but its significantly lower price tag makes it a better value. It comes standard with the 270-hp V-6, automatic transmission, and four-wheel drive. In addition to some TRD-specific exterior and interior bits, the TRD Off-Road gets equipment that helps justify its name. This includes an electronically locking rear differential for maximum traction in slippery or muddy conditions. It also has selectable drive modes (called Multi Terrain Select and Crawl Control) that can alter the SUV's powertrain behavior to accommodate various driving scenarios. We'd select the optional Kinetic Dynamic Suspension, which allows improved wheel articulation during off-road action. We'd also opt for the sliding rear cargo deck, which makes moving heavy cargo easier and even provides tailgate seating.

Engine, Transmission, and Performance
The 4Runner's 4.0-liter V-6 engine and five-speed automatic transmission can team with either rear-, four-, or all-wheel drive. Entry-level SR5 models are rear-wheel drive, while all other trims except the tippity-top Limited model come with selectable, part-time four-wheel drive. Those models have a manually selectable two-speed transfer case with a low-range setting. Limited models have full-time all-wheel drive with a Torsen center differential that can apportion torque to the front or rear wheels as necessary, depending on road conditions and which wheels have traction. In our testing, the mid-level 4Runner TRD Off-Road model provided dutiful acceleration, its old-school V-6 groaning along with a gruff exhaust note. Aged though the Toyota feels in action, its performance is right in the mix with its more modern competitors, including the V-6 Dodge Durango. And the Toyota's rugged frame and torque-rich engine give it a leg up in towing; its 5000-pound capacity beats the Ford Edge and Wrangler, while falling short of the more powerful Durango's 8700-pound limit.
Fuel Economy and Real-World MPG
The 4Runner's powertrain combinations show their age at the pump. Every 2021 4Runner is rated at a lowly 16 mpg in the city and 19 mpg on the highway. Other competitors have similar city ratings but do much better on the highway. Even so, the 4Runner failed to meet its meager EPA highway rating during our 200-mile real-world test, returning 19 mpg on the highway (1 mpg less than advertised). That places the Toyota at the back of the mid-size SUV class alongside the similarly off-road-focused Wrangler.
Interior, Comfort, and Cargo
The interior of the 4Runner is not what you'd call state-of-the-art, with switchgear that could have come from the latter years of the last millennium. Lackluster materials and styling aside, it manages to comfortably fit humans front and rear in spite of its back-of-the-class interior measurements. We haven't tested the optional third row, but we suspect that it's best for children. A flexible cargo area and several large, deep cubbies in the front row mean that the 4Runner is as versatile a hauler as it is a rock-crawler. Just don't try to heave anything into the cargo hold unless you have a chiropractor on call—its floor is uncomfortably high off the ground. The two-row models that we tested had an optional pull-out cargo deck designed to make loading and unloading heavy items—up to 440 pounds—a little easier. It can also double as a tailgate for seating. This provides a flat load floor when the second-row seats are folded, but also robs the cargo hold of several inches of height. Even so, we fit an impressive 14 carry-ons behind the second row.
Infotainment and Connectivity
Every 4Runner features an 8.0-inch touchscreen infotainment system. The interface includes a set of physical buttons as well as rotary volume and tuning knobs. The system, called Entune, comes standard with Apple CarPlay, Android Auto, and a subscription-based Wi-Fi hotspot. A built-in navigation system and a 15-speaker JBL audio system are available upgrades.
Safety and Driver-Assistance Features

The 2021 4Runner earned a four-star safety rating from the National Highway Traffic Safety Administration (NHTSA) and missed out on a Top Safety Pick from the Insurance Institute for Highway Safety (IIHS). Still, every model comes with a host of driver-assistance technology. Key safety features include:

Toyota provides two years of complimentary scheduled maintenance, a rarity in this class. The coverage in other categories is less impressive but matches industry norms.