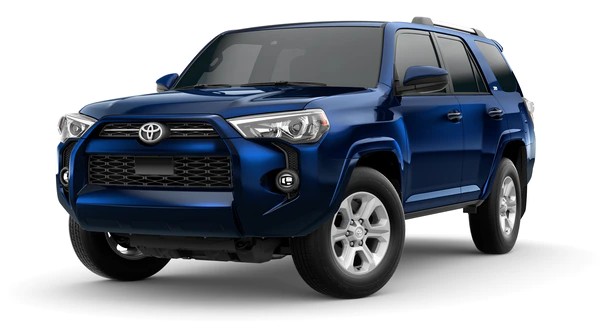 Despite being the elder statesman of the mid-size SUV segment, the 2022 Toyota 4Runner is one of the only ones left that's as rugged as advertised. It may look mostly the same as it did 10 years ago, but its boxed fenders and high beltline still look tough. That image is matched by its sturdy ladder frame and stout V-6 engine, which are great for tackling trails, especially with the lineup's various off-road-ready models, but not so great for refinement and fuel economy. The 4Runner's tall and boxy shape contributes to a spacious cabin and cargo area, but the materials inside look and feel cheap. Toyota offsets the popular off-roader's old age with a suite of standard driver assists, including adaptive cruise control and lane-keeping assist. Still, it's not enough to make the 2022 4Runner as contemporary or desirable as the latest Jeep Wrangler.

For 2022, the 4Runner family welcomes a new TRD Sport model, which for the longest time has only been offered on its pickup counterpart, the Toyota Tacoma. The 4Runner TRD Sport isn't as sporty as its 20-inch wheels, hood scoop, and Sport badges suggest, but unlike most other models except for the more luxurious Limited, it features adaptive dampers that are designed to improve body control. Inside, the TRD Sport features faux-leather upholstery instead of cloth. All 2022 4Runners now illuminate the road with LED high-beams.

Toyota hasn't released pricing for the 2022 4Runner, but that'll likely be announced before it goes on sale at the end of this summer. Since we expect only a minor increase in how much each trim will cost, we can still recommend the TRD Off-Road model. It's not as capable off-road as the lifted TRD Pro, but its significantly lower price tag makes it a better value. Along with standard four-wheel drive and some TRD-specific exterior and interior bits, the TRD Off-Road gets equipment that helps justify its name. This includes an electronically locking rear differential for maximum traction in slippery or muddy conditions. It also has selectable drive modes (called Multi Terrain Select and Crawl Control) that can alter the SUV's powertrain behavior to accommodate various driving scenarios. We'd select the optional Kinetic Dynamic Suspension, which allows improved wheel articulation during off-road action. We'd also opt for the sliding rear cargo deck, which makes moving heavy cargo easier and even provides tailgate seating.

Engine, Transmission, and Performance
Every 4Runner is motivated by a 270-hp 4.0-liter V-6 paired with a five-speed automatic transmission. Available with rear-wheel drive and either full- or part-time four-wheel-drive systems, the outdated powertrain provides unremarkable acceleration, with the last version we tested taking 7.7 seconds to hit 60 mph. The automatic's lethargic responses certainly don't optimize the engine's uneven behavior and downshifts often require heavy right-foot inputs to spur the 4Runner ahead. Still, the Toyota feels more composed on pavement than the more unwieldy Wrangler. Our time behind the wheel of the off-road-oriented Venture model showed off the SUV's notable ground clearance, and its body-on-frame construction was supported by a soft suspension that absorbed a variety terrain. The 4Runner's steering is lightly weighted and imprecise, and while those traits betray any sense of sportiness, they're fine for crawling along trails and around parking lots. Aged though the Toyota feels in action, its performance is right in the mix with its more modern competitors, including the V-6 Dodge Durango. And the Toyota's rugged frame and torque-rich engine give it a leg up in towing; its 5000-pound capacity beats the Ford Edge and Wrangler, while falling short of the more powerful Durango's 8700-pound limit.
Fuel Economy and Real-World MPG
The 4Runner's powertrain combinations show their age at the pump, with every model rated at a lowly 16 mpg in the city and 19 mpg on the highway. For comparison, the V-6-powered Wrangler has much better estimates of 19 mpg city and 24 highway. The last 4Runner we tested on our 75-mph highway fuel-economy route, which is part of our extensive testing regimen, did exceed expectations by returning 22 mpg. For more information about the 4Runner's fuel economy, visit the EPA's website.
Interior, Comfort, and Cargo
The interior of the 4Runner is not what you'd call state-of-the-art, with switchgear that could have come from the latter years of the last millennium. Lackluster materials and styling aside, it manages to comfortably fit humans front and rear in spite of its back-of-the-class interior measurements. We haven't tested the optional third row, but we suspect that it's best for children. A flexible cargo area and several large, deep cubbies in the front row mean that the 4Runner is as versatile a hauler as it is a rock-crawler. Just don't try to heave anything into the cargo hold unless you have a chiropractor on call—its floor is uncomfortably high off the ground. The two-row models that we tested had an optional pull-out cargo deck designed to make loading and unloading heavy items—up to 440 pounds—a little easier. It can also double as a tailgate for seating. This provides a flat load floor when the second-row seats are folded, but also robs the cargo hold of several inches of height. Even so, we fit an impressive 14 carry-ons behind the second row.
Infotainment and Connectivity
Every 4Runner features an 8.0-inch touchscreen infotainment system. The interface includes a set of physical buttons as well as rotary volume and tuning knobs. The system comes standard with Apple CarPlay, Android Auto, and a subscription-based Wi-Fi hotspot. A built-in navigation system and a 15-speaker JBL audio system are available upgrades.
Safety and Driver-Assistance Features

Toyota provides two years of complimentary scheduled maintenance, a rarity in this class. The coverage in other categories is less impressive but matches industry norms.