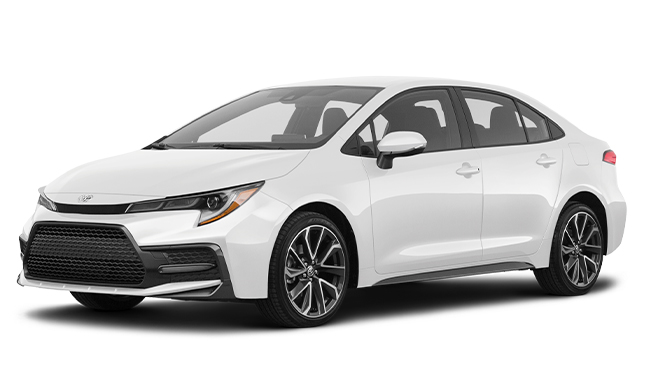 The 2021 Toyota Corolla continues its tradition of being an inexpensive, safety-minded, and well-equipped compact car. Available as either a four-door hatchback or sedan, the little Toyota offers a variety of personalities. Both body styles feature a pair of dutiful four-cylinder engines, and they're also offered with an extremely frugal hybrid powertrain. For folks who appreciate driving engagement, the Corolla can be had with a manual transmission and a sport-tuned suspension. However, it's still less exciting than most of its competitors, such as the Honda Civic and Mazda 3. While the hatch has a tiny back seat, it shares desirable features and an attractive cabin design with the sedan. The 2021 Corolla isn't the most exciting small car, but it's still an efficient and stylish choice.

Toyota adds a limited-production Special Edition to the 2021 Corolla hatchback lineup. The 1500 copies that'll be produced feature an exclusive body kit and Supersonic Red paint. Every Corolla hatchback also adds rear-seat-mounted side airbags, which bring the car's total to 10. Its cargo volume can also be expanded by 6 cubic feet (23 total) with a new no-cost option that deletes the spare tire and adds a tire-repair kit. The sedan also adds a limited-production trim level called the Apex Edition. Along with a unique appearance and a specially tuned chassis, it's available with summer tires and a manual transmission. However, there will only be 120 stick-shift models available; the others have a CVT. Every Corolla now has Android Auto, too. Both body styles are once again available with black exterior accents courtesy of the Nightshade model.

The hatchback Corolla has too many packaging compromises to warrant our interest. Instead, we'd choose the sporty-ish SE sedan. Along with a sport-tuned suspension that makes it more fun to drive than the regular setup, it's available with a manual transmission for an extra $700. We'd happily check that box, even though it voids the option packages that are otherwise available with the standard continuously variable automatic transmission (CVT). Thankfully, the Corolla SE sedan still comes standard with plenty of features to keep us satisfied. The list includes 18-inch wheels, a leather-trimmed steering wheel, front sport seats, and an 8.0-inch touchscreen with Apple CarPlay and Android Auto.

Engine, Transmission, and Performance
Except for the sportier SE and XSE models, the Corolla sedan uses a 139-hp 1.8-liter four-cylinder that sends power to the front wheels through a continuously variable automatic transmission (CVT). The zestier versions have a 169-hp 2.0-liter four-cylinder that pairs with a CVT or optional six-speed manual. While all hatchbacks have the larger engine, only the sedan offers a hybrid powertrain. Our tests of the 2019 Corolla SE hatchback and the 2020 Corolla XSE sedan proved even the strongest engine doesn't deliver adequate acceleration. The Toyota twins were prudent around town and steady on the highway. However, hard acceleration produced coarse engine sounds that diminished their refinement. Both the Corolla sedan and the hatchback have a pleasant ride quality that adequately isolates all but the worst bumps. Their controlled body motions also provide better agility than previous iterations. The Corolla SE and XSE further separate themselves with a stiffer sport-tuned suspension and the latter's larger 18-inch wheels (everything else rides on either 15- or 16-inch rims). Still, compared with athletic and engaging rivals, such as the Mazda 3 and Volkswagen Golf, the Corolla's progressive steering is satisfactory but not exemplary. While neither Corolla body style had impressive results in our 70-mph-to-zero braking test—requiring between 174 and 183 feet—their brake pedals were dependable and easy to operate.
Fuel Economy and Real-World MPG
Along with two fuel-efficient four-cylinders, the 2021 Corolla sedan offers an immensely thrifty hybrid model. The EPA estimates the hybrid will earn 53 mpg city and 52 highway. Comparatively, the government estimates the nonhybrid sedan's 2.0-liter engine will earn up to 40 mpg highway while the 1.8-liter is rated up to 38 mpg highway. The hybrid we tested exceeded its highway rating by 3 mpg on our fuel-economy test route, earning 56 mpg over 200 miles at a steady 75 mph. The only other sedan we tested—a Corolla XSE—saw 41 mpg. The 2019 Corolla hatchback (automatic transmission) earns up to 32 mpg city and 42 highway, according to the EPA. The manual version receives significantly lower estimates at 28 mpg city and 37 highway. We tested the hatch with both transmissions on our 200-mile highway fuel-economy route; the automatic earned 40 mpg, and the manual got 36 mpg.
Interior, Comfort, and Cargo
Inside, the Corolla hatchback and sedan share a streamlined dashboard and soft-touch materials. Most models have passive entry and push-button start. Others can also be upgraded with ambient interior lighting, dual-zone climate control, and heated front seats. Those who regularly have back-seat passengers should consider the sedan over the hatchback since it has considerably more legroom behind the front seats. The Corolla hatchback has 18 cubic feet of cargo space behind its back seat, but we only fit two carry-on bags back there. However, the new no-cost Enhanced Cargo Space option expands that area by 6 cubic feet (23 total) by replacing the spare tire with a tire-repair kit. While the sedan only has 13 cubes of trunk volume, we squeezed eight bags inside. Both body styles had inferior interior cubby storage compared with capacious rivals such as the Honda Civic. Thankfully, there's a convenient tray at the front of their center console and a useful bin below the armrest.
Infotainment and Connectivity
Every Corolla has a touchscreen infotainment system with Apple CarPlay, Android Auto, and a subscription-based Wi-Fi hotspot. The large touchscreen bezel dominates the dashboard, but its numerous hard buttons and rotary volume and tuning knobs help keep the driver's eyes on the road during use. Top options include wireless charging and an upgraded JBL audio system.
Safety and Driver-Assistance Features

The 2021 Corolla hatchback and sedan haven't been fully crash tested by the National Highway Traffic Safety Administration (NHTSA) or the Insurance Institute for Highway Safety (IIHS). However, both body styles earned a five-star rating for the 2020 model year, and each was named an IIHS Top Safety Pick. The entire Corolla lineup also offers a host of standard driver-assistance technology. Key safety features include:

Toyota provides the Corolla with a competitive warranty that's highlighted by complimentary scheduled maintenance. However, rivals such as the Hyundai Elantra and the Kia Forte offer much longer powertrain coverages that span 10 years or 100,000 miles.